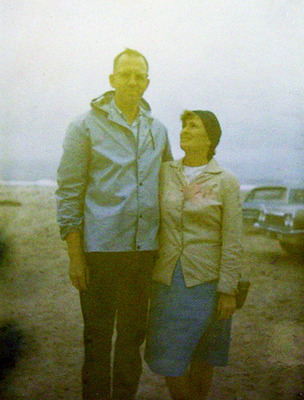 Photograph of Bob and Pat Straub at the first beach rally on Mother's Day in 1966. In the background is a view of the Oregon coast and a station wagon.

Bob Straub led the rally with coordinator Janet McLennan along with two hundred people protesting the relocation of U.S. Highway 101 onto the Nestucca Spit. Protestors marched four miles from Camp Winema to the Nestucca River to where the bridge was proposed to be built.