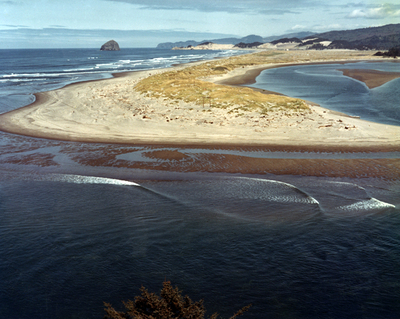 An aerial view of the Nestucca sand spit and mouth of the Nestucca River along the Pacific Coast. This photograph was taken the afternoon of the Mother's Day hike sponsored by Straub and other concerned citizens such as Janet McLennan.

The Oregon Highway Commission proposed a bypass across the Nestucca sand spit in February 1965; Straub adopted this issue to prevent the widening of U.S. Highway 101 as part of his gubernatorial campaign in 1966.