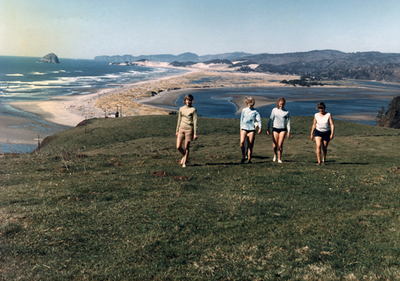 Pat Straub and daughters Jane, Patty, and Peg walk along Porter Point while working to preserve beaches near Pacific City. This photograph was taken by Bob Straub the afternoon of the Mother's Day protest hike. The mouth of the Nestucca River is in the background. The Oregon Highway Commission proposed a bypass across the Nestucca sand spit in February 1965; Robert Straub adopted this issue as part of his gubernatorial campaign in 1966.

This photograph was featured in the newspaper article, "Bob Straub State Park will be Dedicated Saturday" in the Eugene Register-Guard on September 11, 1987.